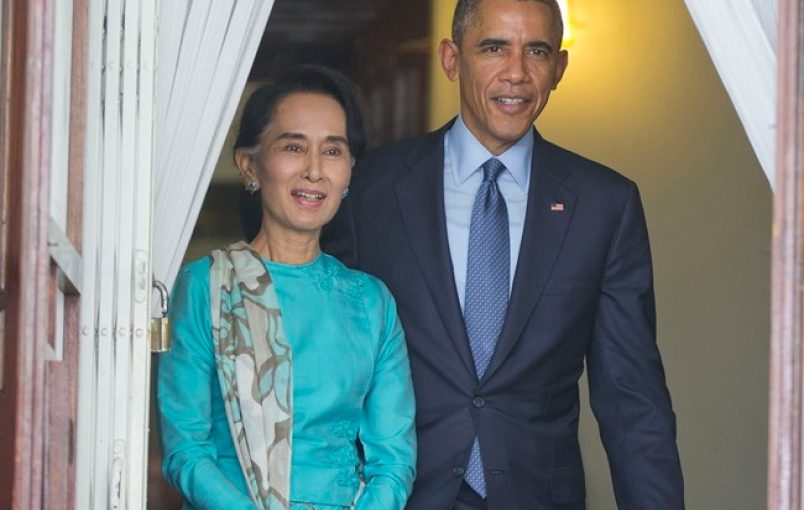 Amazing, now we’re going to directly engage the military dictatorship in Burma. A regime that has kept the country’s duly elected Prime Minister, Aung San Suu Kyi imprisoned since 1990, suppressed democracy, and is before the International Court of Justice for crimes against humanity.

But I guess all that does not matter to Barack Obama.

Oh, incidentally, Burma‘s foreign minister visited the White House earlier this week, although it was claimed he did not meet anyone from the Obama administration, well, that claim has been rubbished, isn’t it…

The U.S. will engage directly with the military leaders in Myanmar as sanctions alone haven’t been effective, Secretary of State Hillary Clinton said.

The U.S. will be “moving in a direction of both engagement and continued sanctions,” Clinton told reporters at the United Nations in New York. “We believe that sanctions remain an important part of our policy.”

By themselves, sanctions “have not produced the results” the U.S. wanted, she said.

The U.S. is leading international calls for the military, which has ruled the country formerly known as Burma since 1962, to make progress toward democracy and has dismissed the junta’s plans to hold elections next year under a new constitution as an attempt to retain power.

Clinton’s announcement is in keeping with decisions made by President Barack Obama to engage diplomatically with U.S. foes including Iran and North Korea.

The U.S. will provide more specifics on the engagement shortly, Clinton said, adding that “engagement versus sanctions” is a “false choice.” The U.S. has imposed trade and financial sanctions on the junta.

Myanmar is facing a critical year in 2010, United Nations Secretary-General Ban Ki-moon said in a statement after a meeting in New York of the Friends of Myanmar group that involved 11 foreign ministers, including Clinton.

“The first planned election in 20 years must be held in an inclusive and credible manner in order to advance the prospects for stability,” Ban said.

The military holds more than 2,000 political prisoners, including Buddhist monks, journalists and artists and has doubled the number of such detainees in the past two years, Human Rights Watch said in a report last week.

Aung San Suu Kyi, the leader of the opposition National League for Democracy, remains under house arrest. She has spent 13 in detention since the NLD won elections in 1990, a result the military rejected.

Myanmar’s junta triggered international condemnation last month when it extended her custody order for 18 months after convicting the opposition leader of violating the terms of her detention. Suu Kyi, 64, is appealing against her conviction.

Yettaw was imprisoned for swimming to Suu Kyi’s lakeside home in the former capital, Yangon, a visit that prompted charges to be brought against the opposition leader.

The UN has called on the junta to open “genuine” talks with Suu Kyi and begin national reconciliation.

Ban and Singapore’s Foreign Minister George Yeo, who also attended the meeting of the Friends of Myanmar, called for Suu Kyi’s release.

“Our engagement with Myanmar must take a longer term view beyond 2010,” Yeo said. “Singapore sees the army as being part of the problem, but also as a necessary part of the solution and in the end what’s required is a process of national reconciliation. It will take time.”

Singapore is part of the 10-member Association of Southeast Asian nations, which includes Myanmar.