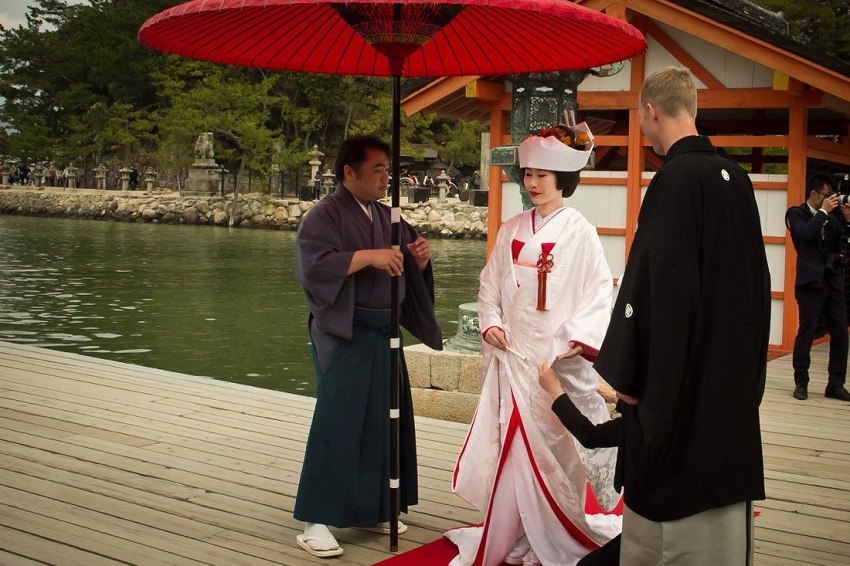 Weddings in Japan are very important as in Spain. It is a special moment in the life of a person, although each one follows the customs of the country where they are from and that can be a curious way of knowing how these weddings are carried out.

When preparing a wedding, we know that it takes time and preparation, but above all it takes money. The couple usually invests a lot between the wedding and banquet suits, food and gifts for the guests, etc. It is an investment that they have to make so that everything goes according to plan. So if you don’t know what to give, the best bet is money.

The bills must be new unless they are not old or worn, they are carefully wrapped in colored envelopes, ornate and eye-catching, except black and white as these are used for funerals.

It is also important to know how much money to give away. For example, 30,000 or 50,000 yen (approximately 233 and 388 euros) is the usual thing, but if your economy does not give so much, give away what you can, avoiding that they are even numbers because it will be frowned upon since the money is not for the couple divide it between them.

As in the Spanish tradition, in Japan, the bride spends a lot of time choosing the perfect dress, but not just one, but two. The normal thing is that it can be changed at least once during the day, although sometimes it can have four dresses.

The first part of the wedding takes place during the morning, in which the bride wears a white kimono, and this shows submission to the new family. This kimono is called shiromuku.

Preparation of the Bride to Start the Ceremony 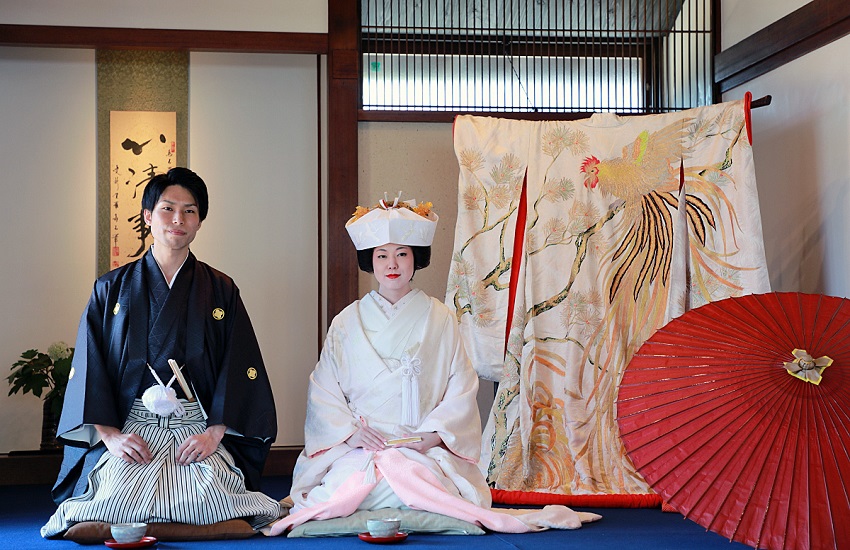 The bride wears another garment called wataboshi, which is shaped like a hood, and underneath she wears an accessory made up of a wig and cloth called tsunokakushi, which literally means hiding horns. This garment symbolizes that the woman hides her selfishness and jealousy to show herself pure and gentle to her husband.

Afterward, the woman has to change her clothes, and wear another kimono that is usually red, black and gold called an irouchikake.

And finally, the hikifurisode is only dressed during the reception and is usually a larger and more elegant kimono.

Unlike the bride’s dress, the groom’s is much simpler. This consists of kimono pants, a long coat, and a kimono. This dress is called montsuki haori hakama and has only the colors black, gray, and white. This is done in this way so that it does not stand out more than the woman.

The groom can also change his suit or tie, but it is normal for him to remain in the same clothes all day.

The traditional Japanese wedding is the Shinto wedding. In this, the bride and groom meet only with the close family and a priest in a sanctuary. The priest offers prayers to the gods, the couple is purified, and prayers are dedicated to each other. Finally, they share three glasses of sake called san-san-kudo.

This moment should not be confused with the usual celebration that we Spaniards carry out. At the end of the ceremony, we usually go to the place where we are going to celebrate the banquet with our family and friends. In Japan, the opposite happens, they have to spend two hours with friends, colleagues, and other relatives who take advantage of that time to congratulate them and wish them a good future.

Next, We Leave You a Speech During a Wedding Held in Japan

During the reception, it is customary for the bride to read a speech she has written dedicated to her parents, while the groom usually helps him with the microphone and whatever he needs so that he can speak without emotion preventing him from continuing. The husband also says some words although he does not bring them ready.

During the reception, depending on the couple, their daring, and financial capacity, there may be magician performances or other entertainment to make the moment more enjoyable and fun. Can you imagine a famous music group showing up in the middle of the reception? If you remember the video for Sugar’s song from Maroon 5, it would be something like that. A big surprise, right?

When the couple attends their family and friends at the reception, it is time to eat and drink, in which everyone is looking forward to it. This celebration is called Aikikai.

When the older ones finish, they retire and the youngsters move to a more relaxed place where they will eat, drink and continue having fun. This is not included in the price of the reception, so whoever wishes to attend must pay an extra. However, if someone is unable to pay, the bride and groom usually invite them because they do not want their friends to be left without attending because of money.

In addition, in this place, there will also be games, music, and prizes, which are another opportunity to see part of your invested money compensated by the guests.

At The End Of The Celebration

Finally, when the guests leave and only a few remain, the newlyweds and their closest friends will move once more to celebrate the sanjikai (“third-party”) in a smaller and quieter place.

The idea is that they can enjoy themselves with those who have not been lucky enough to see so much due to their responsibilities. The bride and groom change into more comfortable clothes to spend some time drinking and enjoying themselves with their loved ones.

We find a celebration that shares part of our tradition, such as a ceremony and a celebration, or the desire to be with our loved ones enjoying the great moment. It also lasts for a whole day, starting with the ceremony in the morning and ending with the sanjikai in the evening. Although we do not have such a differentiated reception time and we do not have the custom of giving only money.

To conclude, say that this tradition has been changing over time. More and more young people feel less the need to put so much effort into the ceremony or opt for another type of wedding, such as the Christian one or directly go to the celebration without any ceremony. Although there may come a time when they are not the majority, the art of traditional weddings will always remain thanks to those who choose the Shinto ceremony.