All the countries of the world have their own wedding traditions and their own rituals. In the case of the United States, we have been able to verify them throughout the immense number of films, television series, and television programs that reach us each year. Including traditions associated with weddings. For those of you who are consumers of these products – we recommend doing it in the original version with subtitles to improve listening in English – you will already know them all. This article is aimed at those who do not know what weddings are like in the United States.

Wedding traditions in the USA are not very different from what we have in Spain. What’s more, over the past few decades we have borrowed many traditions directly from the United States. However, there are enough differences to talk about a typical North American wedding style. One that starts with great propositions. Although we repeat, that romanticism is not unique to weddings in the United States, it has been the Americans who have invested the most creativity and resources in the marriage proposal.

Once everyone has said the expected “yes”, the wedding preparations begin. A ceremony of great value to Americans, who spend more money than any other citizen in its preparation. Before the wedding, and this is a typically American tradition, a pre-wedding known as an “engagement session” takes place, translatable as an engagement session. A kind of rehearsal for weddings to go perfectly. In an American wedding, even the smallest detail is taken care of.

Of course, Americans put all these tasks in the hands of the wedding planner. An essential figure in all weddings in the USA, since they are in charge of organizing everything. From the management of the guests to the coordination of the different activities that make up the wedding, through the hiring of the catering and many more actions. They are professionals specialized specifically in the organization of wedding ceremonies. As we said before, for the average American, weddings involve a lot of budget, work, and coordination.

Another peculiarity of American weddings is the vows of engagement. We have seen this a million times in millions of movies. Speeches that the bride and groom create for weeks and separately to say to each other at the altar. They are usually extremely emotional, romantic, and, in most cases, alluding to specific characteristics of the other person and the relationship. Dance is also essential at wedding parties in the United States. Both the groom with the bride and these with their friends and family. 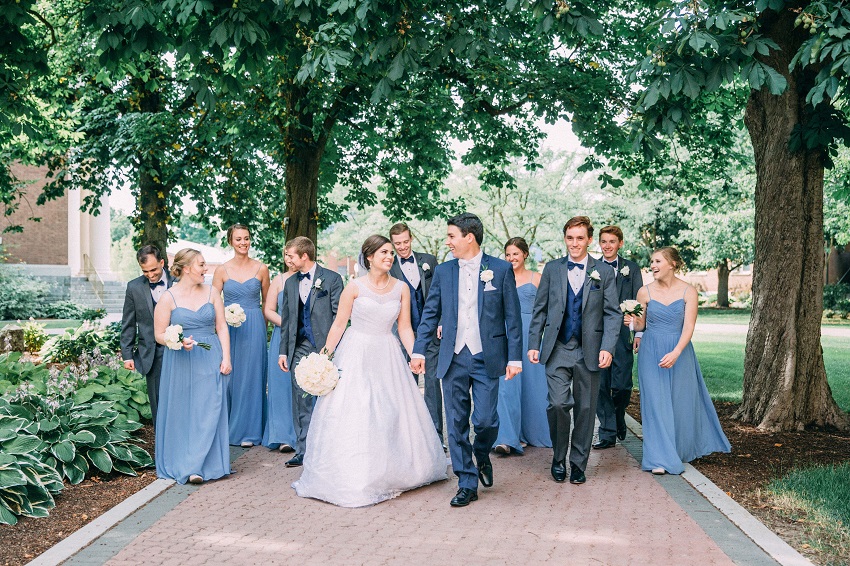 The presence of a court of honor is common to all wedding celebrations in the world. Or practically all of them. However, in the United States, these courts are much more important. Thus, we find figures such as the main bridesmaid of the bride, the rest of the bridesmaids of the bride, the groom’s honor men, the groom’s best man, the flower girls, or the ring bearer in charge of wearing the rings. . As you can see, in this, North American weddings match a lot with Spanish weddings.

Finally, there is another very important characteristic of American wedding traditions: the best man speech and the godmother speech. Both are thrown during the banquet after repeatedly hitting the glass with one of the cutlery to attract the attention of all attendees. Usually, these are speeches that combine many past stories of the bride and groom with emotional words about love. A moment that, as we have seen in many American series and movies, can be wonderful, but also disastrous.